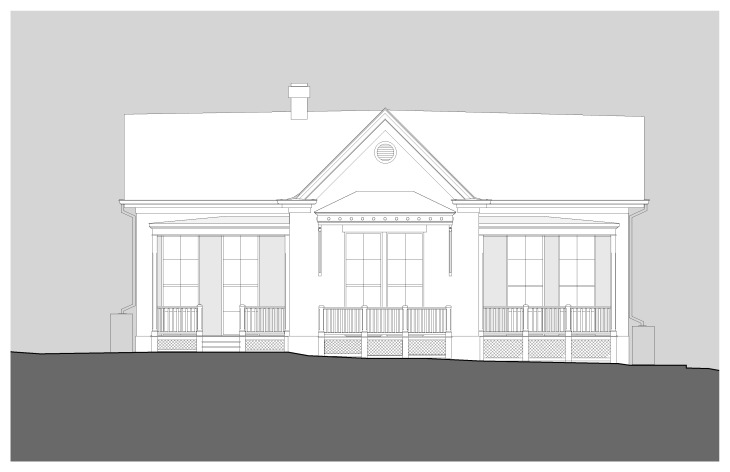 If you grew up without a front porch, you just didn’t know what you were missing until you move into a house with one!  My childhood home was a neo-eclectic, American Colonial suburban house built in 1966 with a stoop-like entry.  Barely 40″ x 40″, it was large enough to hold 3 young children for trick-or-treat or maybe two adults for a photograph – but not much more.  With 1″ deep trim inserts flanking the front door that implied “pilaster”, this was a decorated front entry and not a porch.

The myriad of reasons of why porches disappeared on houses of the 1950’s forward might include, the proliferation of an automobile culture which resulted in private homes with clear delineation of indoor and outdoor spaces; the popularity of private indoor activities such as TV watching and record spinning; and the love of air conditioning in the summertime.  Why sit on the porch when all the good gadgets were inside the house?

Our front porches in an earlier era of traditional houses did so many things – might it be called the hardest working room of the house?  Essentially, a front porch extends the private home to the public – it’s the first covered place you arrive to when you visit or return home.  Spatially it surrounds and embraces while our mind hears, “welcome.”  Porches are also a place where you can share your space with visitors without being obligated to enter the main, enclosed house, the private realm.  “The place is a mess”, “The cat is sick”, “The weather is lovely”, or “I don’t know you well enough” are all sufficient reasons to visit on the porch.

Our recently completed front porches, yes, more than one, are very functional 250 square feet of additional living space.  For a house with only 810 SF of livable area, 250 extra SF will go a long way.  Packages and muddy shoes can be left on the porch, cigar smokers can sit on the porch and it’s the perfect place for me to eat unshelled peanuts.  Porches also serve a function for the house as it protects the building face and windows from the wearing effects of sunlight and rain.

This quick bit of reading is a good introduction to the porch on American houses:  http://www.nps.gov/tps/how-to-preserve/briefs/45-wooden-porches.htm

If you recall from a while back, the wood porches rebuilt in the 1990’s didn’t wear so well. The west porch roof and decking had rotted and was pulling away from the house while the east porch roof was in almost complete failure. 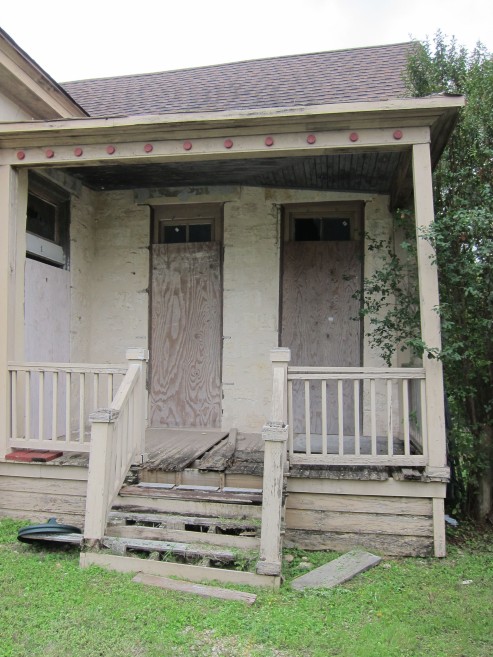 To make matters more critical, the east porch was still sitting on the 1950’s-60’s concrete slab which was pulling away from the house and damaging the limestone foundation.  An earlier post, Porches – Gone! from April 2014 depict the chore of removing the modern work.

Today, The Rock porches are about 95% finished with only the post caps, bottom skirting and paint remaining.

As a vehicle for architectural expression the porch form alone, without the consideration of materials and details, says plenty about the program of the house, the habits of its owners and the traditions of its place.  In our case, we recreated the porch forms that were original to the house.  Evidence in the stone informed us of the locations and sizes of all three porches while the other physical evidence, research on the general style and elevations of the house hinted at the roof type.  In this regard historically the house is correct, however, as far as actual construction is concerned, we clearly “invented” the details.  And this is not entirely bad.  The photo record we have dates only to the 1950’s and it appears that since that time the porches have been rebuilt 3 times, not including this fourth version of ours.  Each version expressed something about its time whether it was the metal scroll work supports that were sold throughout the neighborhood during the late 1950’s, the modern, 2x handrails of the 1970’s and 1980’s or the post modern red “dots” on the roof beams from the 1990’s (more about those on a later post).  In our rebuilding, we wanted to show the basic elements of what might have been original but without copying the ornate Queen Ann center canopy bracket which just might be original to the house or the classically inspired gable trims most likely from the 1920’s. 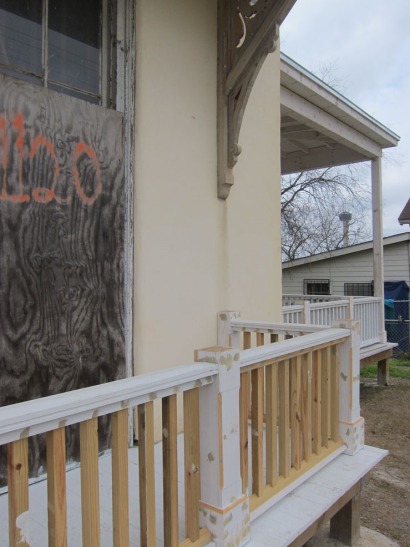 Without a record of the original house style, our aim is to let the form of the house be the primary historic record and keep the wood details to a minimum distraction.  More historic research on the circumstances around the house’s construction may allow us to one day rip off the guardrails, add doodads or other architectural elements, but for the time being, the porches’ simplicity and clarity is refreshing.
Lastly, we had a very special angel help us rebuild these essential porches – The San Antonio Conservation Society knows well the importance of porches on this house and very generously provided a grant to pay for a large portion of the work.  We can’t say enough how grateful we are to the Society for their support which ranged from the financial to technical and encouragement.  They are the preservation treasure in this town and the heroes for The Rock.  https://www.saconservation.org/